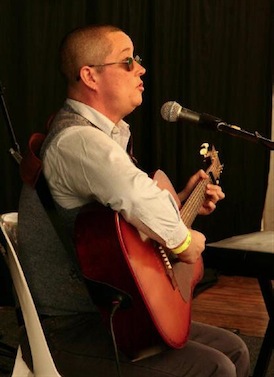 K’crasher’s crystal clear voice, excellent pitch, and ability to hold a note make her a singer of rare power. Add her sense of humour, warmth and conviction to complete the picture of her as an entertainer who can immediately establish a relationship, both friendly and intimate with her audience, and move them to tears one minute and laughter the rest. K’crasher says of herself “I’m a singer but only recently a songwriter. In the past, whenever I thought of writing a song, I coincidentally found someone else’s on the same topic and got distracted learning it. I enjoy presenting other peoples songs, giving them new emphasis and conviction, but there is something special about singing one’s own songs. I only sing songs that I believe in, I can’t sing what I don’t feel. I like material that hasn’t been commercialised. I like to make a real connection with the audience.”

Maintaining a balance in performances between the serious and the light hearted, K’crasher’s sources are wide and eclectic. Her sense of timing, expressive voice and her skills with tricky lyrics help her to tackle a wide range of material. At home with the blues or soul music, she can also sing traditional folk standards and comic parodies. She sings songs such as, Cheryl Wheelers ‘Act of Nature’ and the classic ‘Summertime’. Her sensitive and versatile accompaniments on guitar or piano support and enhance the mood of her lyrics. She balances songs such as Alastair Hewlett’s ‘Suicide Town’ with Tom Lehrer’s ‘Masochism Tango’. Satirical songs by Bernard Bolon, Eric Bogle, Tom Lehrer and Dorie Previn are all part of her repertoire, as are modern folk classics by Joni Mitchell, Loreena McKennett and Cat Stevens. A serious singer, K’crasher also enjoys a good laugh with her cat medley, ‘Somebody’s Moggy’, ‘Basingstoke’ and ‘Birth Control to Ginger Tom’. Her rapid-fire versions of ‘We Sell Everything’ and ‘The Pheasant Plucker’s Song’ never fail to provoke laughter.
Lately, K’crasher’s performances of her own compositions have received enthusiastic acclaim wherever she performs them. Powerful lyrics drawn from her own experiences connect with people at a profound level. K’crasher is capable of being both bitingly insightful and compassionate at the same time, not to mention “stark raving Mad”.

Her music has taken her to all the usual hangouts, bars, clubs, functions and concerts. She has added a touch of music and humour at many a wedding and performed at political and environmental rallies across Australia. K’crasher has played at many festivals including the National Folk Festival in Canberra where enthusiastic audiences packed the venues of her performances to capacity.

She has done session work with piano, guitar and vocals mostly around NSW and the ACT. “Her instinctive harmonies make her a joy to sing with. She is a keen judge of a good song. She bristles with good humour. Her smooth guitar work and perfect pitch combine to make her an impressive interpreter of modern song”, said Bruce Cameron, president of the Bathurst Folk Club, and a musician that has rarely missed a folk festival.

Up until recently K’crasher only released recording has been ‘Live on Friday the 13th’ recorded at the Merry Muse Folk Club in Canberra by Moonlight Records.

K’crasher has now established her own business: BristleHead Music, and has financed and produced her current CD ‘Towards the Light’. This CD contains a selection of songs written by artists such as Tim Buckley, Christine Laven and many others. Special treats are K’crasher’s own songs.