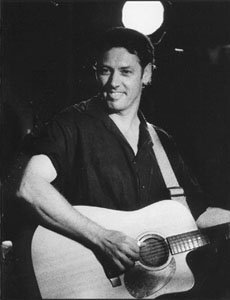 Keith received his first guitar at age nine as a gift from his father, a retired dance pianist. He grew up listening to artists like Bob Dylan, Cat Stevens and Neil Young, and steadily developed his guitar skills. Soon songwriting became a consuming passion. He joined a high school band and began performing in cafes and pubs. Keith turned his back on a year of air force training, and set out with a guitar and a backpack in search of adventure and the stories that were to become his songs.

Over the next few years, Keith travelled north to Townsville, Cairns, and Darwin, south to Tasmania then back to Sydney. He wrote songs about his experiences, playing gigs and busking wherever he could. Forced to take on many and various jobs to survive along the way, he worked as a deckhand for abalone divers, mined for wolfram, unloaded shipping containers, and waited on tables. He finally managed to save enough to travel to France to track down Franky Camus, a blues harmonica player he had known in Townsville.

After a few gigs in the French Alps, Keith encountered guitarist Antoine Demarest, based in Paris. Together they began songwriting, making demos and singing in small cafes – soaking up the nightlife, the music scene and the culture. Then they hit London, playing the pubs and wine bars whilst Keith worked as a waiter and Antoine as a bus boy in the Strand Palace Hotel. But after two years away, Keith was missing Australia. He and Antoine returned to Sydney to start a new band.

‘The Middle Distance’ began as a duo at the Alley Cat in North Sydney and the Rest Hotel in Milsons Point. After adding a drummer, Keith moved on to bass and they became a ‘three piece’, attracting a large following in pubs all over Sydney. They were the first band to play at the Great Northern in Chatswood – kicking off a great venue for many bands to follow. After five exciting years, four drummers, numerous demos, hundreds of gigs, and a packed “send off” at the Northern, Keith felt the need to discover his own style of music and redefine his direction as an artist.

Keith began studying to learn more about the craft of songwriting; he attended seminars and workshops, and read all he could on the subject, picking up five songwriting awards along the way. The song ‘Holden HT’, a nostalgic tribute to his favourite car, won the Australian Songwriters Association award for best novelty song in 1993. He also studied acting and television presenting; guest appearing in ‘Water Rats’, All Saints, and countless commercials. In high demand as a solo performer, he secured high-profile gigs in the Snowy Mountains resorts, at the Darwin Casino, and on the cruise ship Fairstar.

In 2000, Keith’s love of songwriting led him to develop “Songwriters Unplugged”, held every week at the Ivanhoe Hotel in Manly. The event showcases some of Sydney’s top songwriters before a large, receptive audience. Performers have included: Louise Perryman, Steve Balbi (ex-Noiseworks), Jackie Bristow, Amanda Easton and Maz to name a few.

Determined to develop his own unique ‘Australian Coastal Country Sound’, Keith withdrew from the limelight to create and record. Now after two years of hard work, being true to himself and writing from the heart, he has emerged with a beautifully written and produced album titled: “The Coast Road”.

Keith’s album is available via his website at www.keitharmitage.com, or through selected outlets supplied by “One Stop Entertainment” – phone (02) 3279 2754